Randy was a shy kid.
Was nothing more than a misfit.

He grew up a rebel, not a trendsetter.
Because Sharma Ji’s son, was always better.

Randy met Sasha, during the best of his days.
And he met Vivian, in his little “emo” phase.

When he went away to college, he fell in love.
He was happy and his head, was in the clouds above.

Sasha turned to a party chick, who had it all.
She, unlike Randy, gave her love to alcohol.

And then Randy lost his love, he was heartbroken.
His friends were there by his side, like grease to bacon.

There came a new addition, to their colour pallette.
She was Sasha’s girlfriend and her name was Violet.

She was Randy’s rock, when he least expected.
And that’s why their friendship stands, strong and protected.

Vivian fell for a boy, with manipulative ways.
He was pretty and quiet. Let’s call him Chase.

Abigail, Sarah and Tanya, were all of Violet’s friends.
Soon, they acquainted with Randy and they were a family, in the end.

Morticia and Allison, were his friends from Mumbai.
Morticia loved Asriel and Allison was bi.

April and Randy, share a love that’s intense.
He calls her “daddy”, in the ironic sense.

They are all his lovers but not in a sexual way.
Because let’s not forget, that Randy is gay.

The leaves haven’t changed colour in India but a year has now passed.
Randy’s recovering from his mental illness and his fears are no longer masked.

He is trying to move on, he doesn’t want to feel sad.
He was driven to his last therapy session, on Thursday, by his dad.

Sasha lost a her grandfather, a void nothing can fill.
And through the ups and downs, the girls are in love still.

Violet’s parents have financial troubles and her dad’s drowning in debt.
Graduating may change things but for now, their love’s safe and set.

Abigail got together with Jackson but he broke her heart.
Sarah fell for Vivian, though she thought she was smart.

Abigail focused on her ambitions because her heart, she couldn’t mend.
Sarah wants to take a year off, once college, does end.

Tanya is Tanya and that has not changed.
April wears chokers because her kinks are deranged.

Morticia and Asriel’s relationship, is as strong as it gets.
Randy wishes them, happiness and lots of chicken nuggets.
Allison’s had a challenging semester and now she’s single.
Randy met Ripol at a strip club, they’re bottoms who love to mingle.

The story will continue, so be patient and keen.
For it’s the last few days, of December 2016.

These kids are a mess but at least they aren’t criminal files.
Their memes have likes that are spread across a million miles.

A lot has gone on and there’s lots to say.
Until then, just know that Randy is gay.

About Randy:
Randy Scarhol is a 22 year old, blogger, youtuber and a pop culture enthusiast, from Bangalore. He is a student of Architecture and is obsessed with fashion and contemporary art. Being openly gay, he also does his best to lend his voice and support to the gay rights movement and the LGBTQ community.
You can follow his work on:
https://randyscarhol.wordpress.com 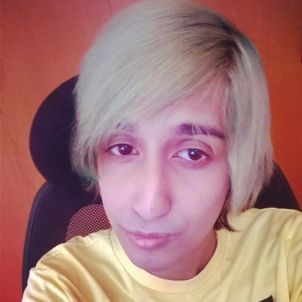